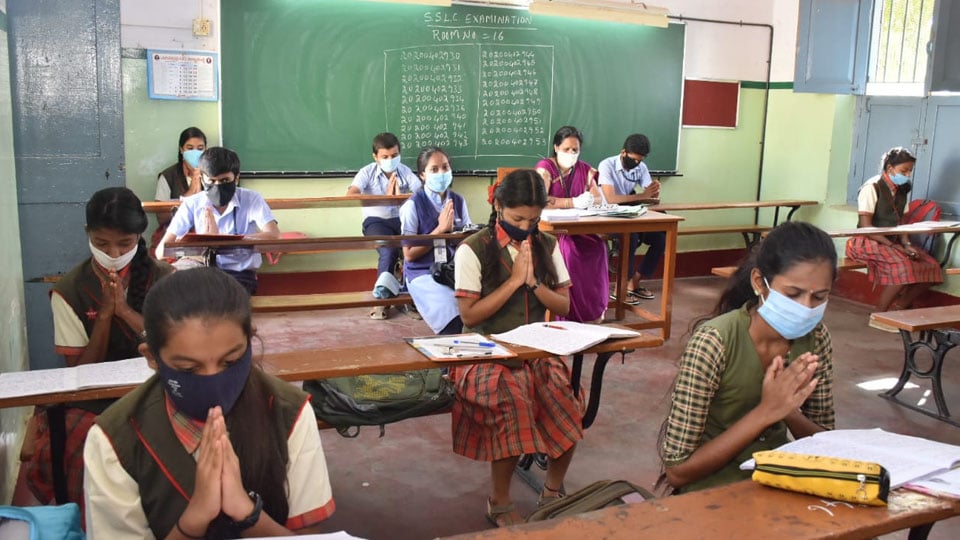 Mysore/Mysuru: The Secondary School Leaving Certificate (SSLC) examinations commenced in Karnataka this morning with Second Language paper (English, Kannada) amid relaxation of COVID-19 lockdown restrictions. In Mysuru, the exam passed off peacefully in 139 centres in the district and 48 centres in city.

As many as 37,738 students had registered for the exam in Mysuru and 35,935 wrote the exam today with 1,803 absentees as they were denied hall tickets for lack of attendance. 45 students were from Containment Zones and four students had cold and fever. They were made to write the exam separately.

Schools (exam centres) ensured that masks were worn, surroundings sanitised, social distancing norms were followed and other precautionary measures were taken. All the students underwent thermal screening at the centres and were provided hand sanitisers and masks.

The exam is being conducted amidst unprecedented precautions and each classroom had around 18 to 20 students. The State Government decided to go ahead with exams with utmost precautions after the parents, students and political parties expressed their fear of health risk during exams.  Many mock drills, inspections were conducted and guidelines have been issued to the centres.

The examination will end on July 4. Students in Containment Zones and those with symptoms such as cough, cold and fever were made to sit in another classroom and write the examination. All the exam centres were opened as early as 7 am and students and parents started arriving at the centres at 7.30 am. Exams began at 10.30 am and ended at 1.30 pm.

Even in Mysuru, mock drills were conducted to ensure standard operating procedures are followed at all times. The teachers were called in and trained for thermal scanning and other checking procedures to be carried out.

Mysuru Deputy Commissioner Abhiram G. Sankar informed in a Facebook live message yesterday that the District Administration had taken all precautions issued by the Government and ensuring that the guidelines are being strictly followed. “We have been working for the last two weeks to put everything in place for the examination ensuring they maintain social distancing, wear a mask and sanitise,” he added.

Entry of the public has been banned near the premises of schools to ensure the safety of the students and staff. All the entrances of the exam centres were barricaded and there was only one entry and exit. Beyond barricades, only students were allowed by walk and circles/boxes were marked for the students to stand and walk one-by-one. Police personnel were deployed to avoid crowding near exam centres.

Soon after the exams ended at 1.30 pm, public announcements were made at all exam centres asking the students to leave for home immediately without loitering around or discussing the question paper. The students were advised not to roam around the city areas and return home with their parents who were waiting outside the exam centres.

At the N.R. Mohalla Government School exam centre, a private company ‘CDS Vision’ conducted successful screening of students in groups. To smoothen the process of thermal screening, a group of 20 students were screened in one go using an advanced thermal scanner and the results were flashed in the laptop connected to the thermal scanner.

One of the students in the Containment Zone refused to write exam in a separate room and insisted that she will write the exam along with others. She said that as her swab samples tested negative, she should not be separated from other students.

After much convincing and coaxing by authorities and Health Department personnel that it was for her safety and the safety of other students she has to write the exam separately, the student relented and sat in a separate room. For her to face the exam confidently, officials stayed in the room, not leaving the student alone.