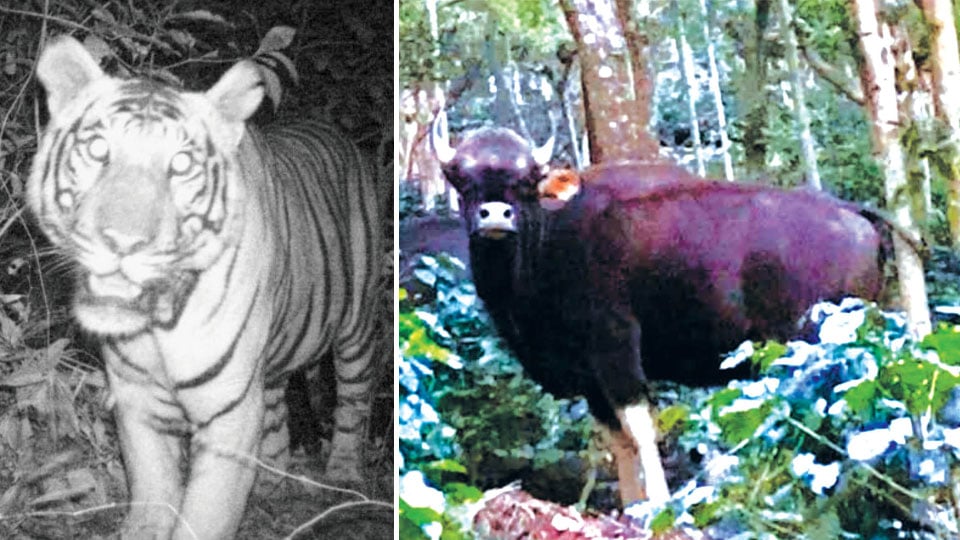 Madikeri: Farmers and coffee growers of Kodagu are spending sleepless nights guarding their crops as wild animals continue to raid and destroy farms and estates near forest fringes. While wild elephant menace is considered normal, tigers, leopards and the Indian Gaur (also called the Indian Bison) taking shelter inside the coffee estates in search of easily-available prey and lush green foliage, have made matters turn from bad to worse.

Fear has gripped residents of villages situated on the periphery of the forest after many cattle heads were attacked by tigers. On the one hand, wild elephants have been straying into the villages and destroying crops and on the other, the tiger has been creating fear in the villages.

Since the last one-and-a-half months, more than 30 cattle heads have been attacked and residents have recovered half-eaten carcasses in their fields and coffee estates. More than 15 cattle heads were attacked with their throat partly bitten by the big cats. Out of fear of human presence in the vicinity, the tigers have abandoned the cattle heads after pinning them to ground.

Residents who have been depending on dairy farming for livelihood are worried over protecting the cows from tigers. The cows that were left for grazing have fallen prey to tiger attacks. Kodagu is surrounded hilly areas and forest and the tiger has been targeting only cows. Camera traps set up by the Forest Department and CCTV cameras installed outside the house compounds have captured the images of tigers venturing inside the human habitat in search of food.

Fearing the feline, estate workers are not willing to come for work even during peak season when the coffee growers are busy in drying coffee, irrigating their estates and picking pepper from vines spread on trees. These coffee estates are also under a great threat from large  herds of Bisons numbering close to 20 in each herd, walking amidst these estates, creating panic among the owners and the workers.

Menace at its peak

The menace that had declined after the natural calamity hit Kodagu in the last two years has now reached its peak making people wonder whether there has been a rise in the wild animal population in the district. The normal methods used by the farmers to scare away the wild animals are no longer effective these days. The wild animals have become accustomed to the sight of fire, bursting of firecrackers and beatings of the drums. They raid the fields fearlessly, farmers said.

In spite of Kodagu receiving good monsoon showers, the lakes, wells and water bodies have not been filled up with the required amount of water. Elephants are not getting enough food inside the forest. As a result, they are straying into villages in search of food.

Elephant menace has particularly increased in Madapura, Soorlabbi, Chettalli, Kodagarahalli, Shanthalli and Shanivarasanthe. Elephants are also camping at coffee estates in Kanoor, Ponnampet, Kumatoor, Kutta, Beeruga, and Kakoor in South Kodagu. The menace is so bad that small-scale farmers have stopped farming activities, unable to bear the losses incurred by elephant raids.

Between 2014-15 and 2016-17 human-wildlife conflict across Karnataka killed 149 people accounting for almost one death every week.  Most lives were lost in Virajpet (16 deaths) and Madikeri (12), both in Kodagu district, as per the data from Forest Department from its 36 forest / wildlife divisions. However, the data after 2017 is not available.

Farmers and coffee growers allege that they get peanuts as compensation or crop loss. The compensation released by the Department in case of loss of cattle heads is a meagre Rs. 10,000 while the actual cost of a cow ranges from Rs. 40,000 to Rs. 50,000. “We don’t get any money for crop loss and even if they do sanction, it will take years to reach us and we have to run from pillar to post,” say the farmers.

On Feb. 17, CCTV cameras installed by Forest Dept. captured the movement of a tiger which caused havoc by killing cattle at Birunani, B. Shettigeri, Harihara, Nalkeri, Hudikeri and Bellur. Tiger was seen walking amid trees but the exact location was not confirmed as the cameras have been installed at several locations.

Officials said that the tiger’s movements have been tracked to a coffee plantation and the big cat has possibly moved out of the forest. Cages are being placed to capture it and tranquillizer experts will be deployed and the Department was waiting for permission from higher-ups, officials added.