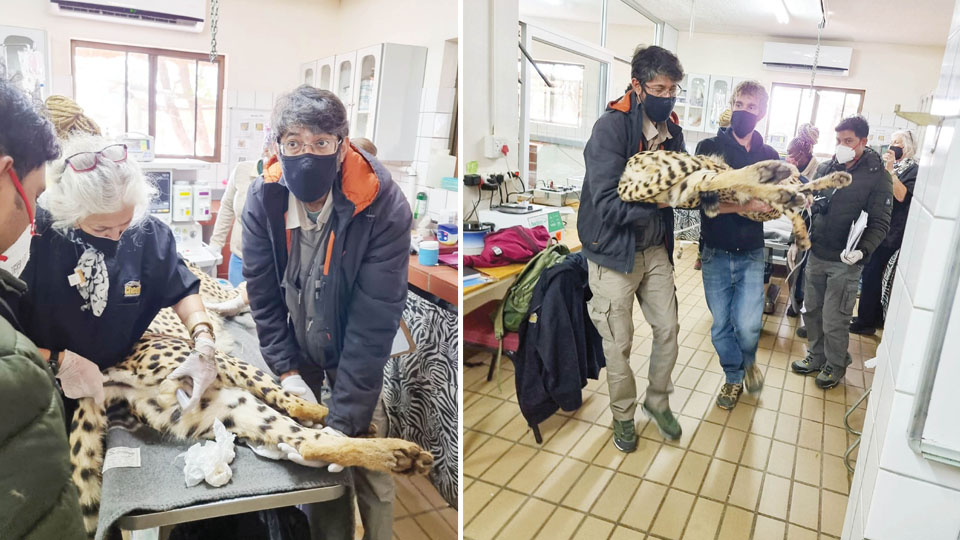 Mysore/Mysuru: A wildlife Biologist and Ecologist from Kodagu is in the team that brought eight Cheetahs (Acinonyx jubatus) from Namibia to Madhya Pradesh’s Kuno National Park which were released by Prime Minister Narendra Modi on Sept. 17.

C.M. Bipin of Kodagu is in the core management team of Dr. Yadvendradev Vikramsinh Jhala, Lead Scientist for Project Cheetah and Dean of Wildlife Institute of India.

C.M. Bipin has been working on Project Cheetah since 2011 as a Project Associate at the Wildlife Institute of India, Dehradun, autonomous wildlife research and natural resource service institution under the Ministry of Environment Forest and Climate Change (MoEF&CC), Government of India. Bipin’s name figures prominently among the survey team for the project.

Hailing from Kanoor village near Ponnampet in South Kodagu, Chottekmada Bipin is an Industrial Engineering Management graduate who pursued his passion for wildlife and nature. He finished his schooling at St. Anne’s School, Virajpet and college at Sathya Sai Loka Seva Trust, Alike. His parents Monnappa and Tara Monnappa, retired teachers, are settled in Kanoor.

Speaking to Star of Mysore from the Kuno National Park where he is monitoring the Cheetahs, Bipin said that though he worked for an electronics company in Bengaluru soon after his engineering at the RV College, nature and wildlife was his passion.

“I was feeling suffocated, so I left and joined a conservation and ecology team at the Centre for Wildlife Studies, Bangalore, in 2004 working on monitoring tigers and prey populations in Karnataka. During this period, I felt the need of educating, better-equipping and training myself in wildlife science and nature conservation and I completed my M.Sc. in Wildlife Biology,” he said.

Bipin later joined National Centre for Biological Sciences in Bengaluru in 2008 for his Master’s and subsequently joined the Wildlife Institute of India, Dehradun in 2011 and has been involved in Project Cheetah.

“As part of the project, the landscape of five States — Rajasthan, Gujarat, Chhattisgarh, Uttar Pradesh and Madhya Pradesh — were studied. 10 places were identified as suitable for Cheetah reintroduction and among them, five were shortlisted with the Kuno National Park in Madhya Pradesh, Shahgarh landscape and Mukundara Hills Tiger Reserve in Rajasthan and Nauradehi Wildlife Sanctuary in Madhya Pradesh being identified as priority ones,” Bipin revealed.

When the project work was on, in May 2012, the Supreme Court stalled the plan to reintroduce Cheetahs into Kuno sanctuary fearing they may come into conflict with a project to reintroduce lions into the same sanctuary.

But in 2020, the SC lifted its stay, clearing the project after an affidavit filed by the National Tiger Conservation Authority (NTCA) to take the plunge — under the guidance from an expert committee headed by Dr. M.K. Ranjitsinh, the architect of Wildlife Protection Act — and go ahead with plans to bring the African cat to India.

“During the period of stay, I started work on the population recovery and habitat improvement of the critically endangered Great Indian Bustard, the grassland and open forests habitat of which the Cheetahs roamed in our country once and I re-joined the Cheetah Project after the Court clearance,” he said.

Bipin was sent to Namibia and South Africa with the team during June 2022 for a training in handling the Cheetah, habitat management, research, methods of conservation at different levels and how to avoid conflict with villagers living on the forest fringes.

“I gave technical inputs after ground studies along with my team and additionally wore many hats as and when needed including providing assistance required in administrative, financial, legal and policy matters. As the days for the release drew close, though rainy season in India is a difficult period to release Cheetahs in India due to inaccessibility to many forest areas and logistical constraints, it would have been wise to wait for the monsoon to end,” he explained.

September was the ideal month and the occasion was PM Modi’s birthday. The officers of Madhya Pradesh Forest Department, NTCA and MoEF&CC at various levels very efficiently coordinated and performed their roles meticulously in making the project a reality, Bipin added.

“The Kuno National Park, situated on the northern side of Vindhyachal mountains, can handle 35 Cheetahs and has an inviolate area of 748 sq.km. where the Cheetahs have a suitable area of up to 6,800 sq.km surrounding them. We had identified four more areas apart from Kuno National Park and the project Cheetah entails bringing 50 big cats from Africa in the next five years and in the long run establishing a viable cheetah metapopulation in the country,” he said.

The Kuno National Park has a good prey base for Cheetahs, comprising the four-horned antelope, chinkara, nilgai, wild pig, spotted deer and sambhar.

Cheetahs will help restore open forest and grassland ecosystems in India and its dwindling wildlife. This will help conserve biodiversity, consolidate and enhance the ecosystem, mitigate climate change and boost the local economy with various livelihood opportunities.

“Extensive hunting of Cheetahs and habitat loss led to their extinction. The ‘African Cheetah Introduction Project in India’ was first mooted in 2009 by Wildlife Trust of India and we have come a long way in finally bringing the fastest animal on earth to India,” Bipin added.

Elated over her son being in the core Project Cheetah team, Bipin’s mother Tara Monnappa told Star of Mysore that the family is proud of Bipin’s achievements. “I don’t have any words to express and he has been passionate about nature since childhood. I am glad he could pursue his passion with full vigour,” she said.

In fact, Bipin’s wife Amritha too is a sociologist and conservationist and works for The Nature Conservancy, a global environmental organisation, working in areas in Assam. Her specialisation is communities living in villages on the fringes of forests and their interactions with wildlife and nature.

Bipin’s elder brother C.M. Bishan is an Orthopaedician in Gonikoppa, Kodagu and an avid wildlife photographer.