Home » Feature Articles » When will we get Gandhian Peace Chair in Mysore University ? 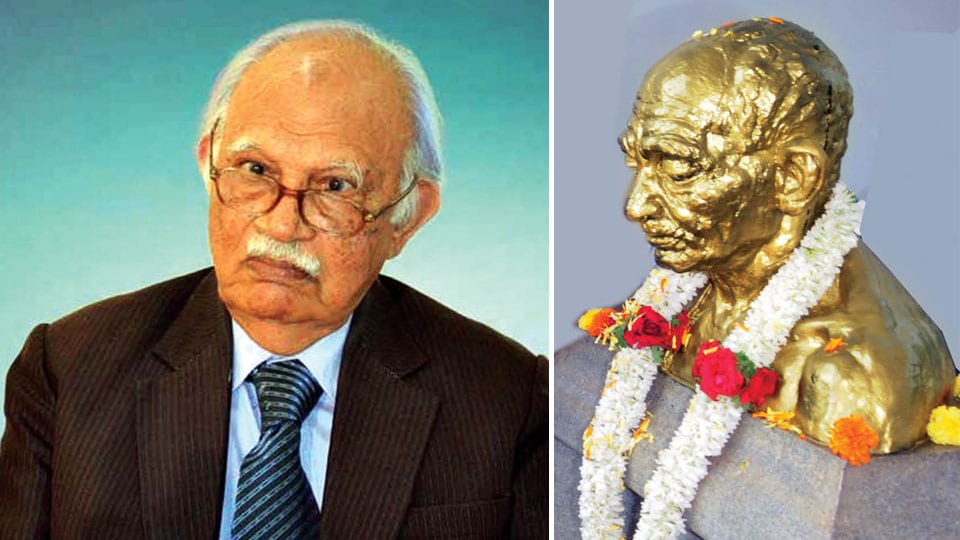 When will we get Gandhian Peace Chair in Mysore University ?

By Prof. B. Sheik Ali, Founder Vice-Chancellor of Mangalore and Goa Universities

One of the suggestions I offered in the very first meeting of the University Centenary Committee in 2014 was the establishment of Gandhian Peace Chair in the University. Subsequently I prepared a Project Report in this behalf and submitted it to the University on Aug.12, 2015. However, no action was taken.

I still feel that need of the hour both at national and global level is peace. This point I stressed even on Sarvodaya Day (Jan.30, 2018) which SOM was good enough to carry on its first page on that very day. I would like to expand this idea a little further.

The major thrust of this project is not desk work but publicity through electronic and print media. If it is flashed on the screen day-in and day-out Gandhian thought of Ahimsa, some results would be achieved sooner or later. If you concentrate more and more on things of beauty, you would become a part of that beauty. People have achieved great things through non-violent action. They have won many victories.

Man is not born with the horns of a bull or the claws of a tiger. He is born with a spirit and soul. Kindle the conscience with the torch of learning, then you would know the responsibility you owe to the society. Brutality is beastly life; compassion is human life. Gandhiji has said violence must be controlled by greater violence, which is moral force.

India alone could seize the moral leadership to establish peace at different levels. It possesses the code of purest morality and the system of highest philosophy. It has an unblemished record of 5,000 years of history, when it never invaded any country. India has always preached humanism, liberalism, eclecticism and universalism. Swami Vivekananda is on record, “If people were to be baptised in Hindu humanism, Buddhist compassion, Christian love, Islamic equality and Sikh integrity, humanity could be unified.”

Our recent history proves the wonder of non-alignment policy.

Not having the economic power of America nor the military strength of Soviet Union, we had commanded the respect of both and had gained the prestige of leadership of their World’s Third Block. Let us not now be camp-follower of either America or Russia, but build a sphere of our own through moral leadership, which is the gift of Sarvodaya.

India stirred the imagination of the world when it launched the programme of YOGA. Through Gandhian techniques for peace, let us achieve what the West failed to achieve in its three major efforts for peace, one the concert of Europe in 1815 after Napoleonic defeat, second, the League of Nations in 1919 after the first World War, and the third, the United Nations Organisation in 1945 after the second World War. Gandhiji had actually conceived a plan of Asian Federation committed to peace and freedom. We did not give him a chance after we won freedom.

Humanity is in need of peace at all levels, individual, social, national and global. How miserable a man would be if his peace of mind is disturbed?  How perturbed a family would feel, if peace is missing? How sad a society would feel, if peace evades its grip? How chaotic a country would be, if peace is destroyed? Peace exists when conflicts and confrontations are resolved, for which will and action are needed. At no time Gandhiji, the apostle of Ahimsa and the prince of peace, is more relevant than at present.

Universities should not become merely information distribution centres. They must become the sanctuary of the inner conscience of man, the custodian of a nation’s culture, the promoters of highest absolute values and the crusader of some noble cause, such as peace, which would be a boon to mankind. Would Mysore University seize this opportunity?

Fortunately, there was a former Vice-Chancellor and the Head of the Department of History of the same University, highly-respected for his scholarship and concern for academic excellence, Prof. B. Sheik Ali who made his suggestion in the very first meeting of the University Centenary Committee in 2014. The Committee should have embraced the idea to set up the Chair and covered itself with glory as a University of vision.

Pardon me, probably Prof. Sheik Ali should have suggested a University Centenary Hall,  much bigger than the Maharaja’s College Centenary Hall. It would have been accepted and by now that building would have already been completed before the term of the Vice-Chancellor.

Did those in that meeting, except for Prof. Sheik Ali, know why the National poet and the Nobel Laureate Rabindranath Tagore called his University Shantiniketan? I doubt.

By the way, peace is defined as an interval between two wars. World history is replete with evidence for this truism, but then can we give up the pursuit of peace for the inevitable war? Certainly not; at least let us preach peace to young minds at an impressionistic age in our Universities by establishing ‘Gandhian Peace Chair’ as suggested by Prof. Sheik Ali.

I thank Prof. Sheik Ali for igniting my mind to write this note by his beautiful article with its fragrance of peace.

2 COMMENTS ON THIS POST To “When will we get Gandhian Peace Chair in Mysore University ?”