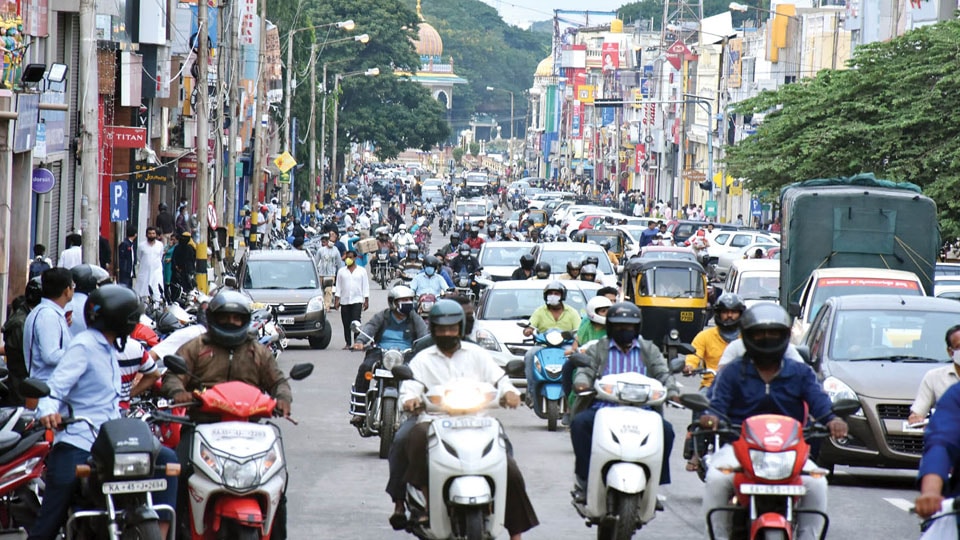 Zoomcar, India’s biggest self-drive rental car company, surveyed 22 cities using its proprietary drive scoring system. The company collected close to 200 million data points and the result? Out of the top three worst drivers in Indian cities, two are from Karnataka — Mysuru No. 1 and Bengaluru No. 3.

How did we Mysureans become such bad drivers? It is perplexing because while we’ve been ranked as the worse drivers in the country, our city has a driving school on every second street! Are these schools not teaching driving properly? Or, are their services used more to get a licence “easily” rather than learning to operate a vehicle correctly and safely?

Two decades ago, for a fee, “agents” and “touts” around Regional Transport Office (RTO) would do the paperwork such as filling forms, attaching photos, getting stamps, seals etc. They would also do some “greasing” work to make the wheels of RTO move quicker such as getting data entry done faster and getting the Test Inspector’s appointment at your convenience. But most RTO Test Inspectors would still be pretty strict and make sure you knew your driving basics well before he signed off on you. Things have changed now.

In 2017, Save a Life Foundation, a well-respected non-profit, non-governmental organisation committed to improving road safety, surveyed ten major cities in India. They wanted to know how many people got their driver’s licences without a driving test.

It is an open secret that obtaining a driver’s licence for young Indians is their first interaction with a Government official, and it’s also their first lesson in negotiating the “right price” or engaging a middle man to get Government work done with ease.

When a 16-year-old gets his learner’s licence, he also earns a learner’s licence on how to bribe. There is a direct correlation between corruption at RTOs in issuing driver’s licences and bad drivers leading to death on Indian roads. It has also become a sociological problem as it introduces young minds to bribing their way to success without effort.

This driver’s licence corruption, which has led to an increased number of bad drivers and, in turn deaths on Indian roads, prompted Harvard Business School to do a study titled  ‘Obtaining a Driver’s Licence in India: An experimental approach to studying corruption.’ One of the conclusions was that 62% of Indian drivers were unqualified to drive when they obtained a licence!

Mysuru is growing slowly but surely, and it’s time to prepare, not just the roads but also its drivers and its public transport services. First, the RTO needs to have two tests — one for city driving and one for Highway driving. It is crucial considering that Mysuru is getting a 10-lane expressway to Bengaluru.

Most drivers in India are not aware of many aspects of driving, such as “blind spots” and “lane discipline.” Mysuru drivers must learn lane discipline — Stick to your side and not slither on the road like a snake from one side of the road to another. When you have no lane discipline, no matter how big a road you make, it will never be enough.

As per the Report on Road Accidents in India 2019, over 24,431 road accidents occurred due to lack of lane discipline, and over 9,201 deaths happened due to overtaking and when changing lanes. We Mysureans should be aware of this as we will be driving a lot on the new expressway and at high speeds where lane discipline becomes crucial.

We also need to stop making our own traffic rules — especially the flicking headlights and improper use of the indicator. Most drivers assume that if they flick their headlights, they have the ‘right-of-way’ even on a one-way! Then there is the “over-take please” indicator where they turn on the indicator of the side they want you to overtake them from! It’s confusing and dangerous. It feels like we Indians drive as we walk on the streets — all over the place, too close to others and utterly unaware of the space around them.

READ ALSO  A Statesman and a Survivor

Makes one wonder do we Indians have a genetic problem? Because Cerebral Cortex, a scientific journal in 2009, reported that a gene variant which limits the availability of a protein called Brain-Derived Neurotrophic Factor (BDNF), which is important for motor skills, was found in bad drivers! People with this gene variant performed more than 20 percent worse on a driving test than people without it. But this may not apply to our drivers because we never took a driving test to get a licence, so it’s not genetics; it’s corruption.

As more and more vehicles enter Mysuru roads, it is wise if the Government starts with Metro work in the city. Last year MUDA was to undertake a feasibility study if the Metro Neo corridor, a rail-guided mass urban transport system, could be deployed in Mysuru. Sadly, there has not been any movement in that direction.

A city without efficient, clean and on-time public transport will always find its roads are never wide enough and shall always remain chaotic.

As far as Mysuru traffic and bad drivers are concerned, we do as a TV host, said, “In India, you need Good Horn, Good Brakes and Good Luck.” It would be best if you also had a good sense of humour to survive it.

The need of the hour is a better driver’s test and a non-corrupt licence issuing system, else Mysuru will end up with bad roads, bad drivers and bad press. All bad for our city’s tourism and business.