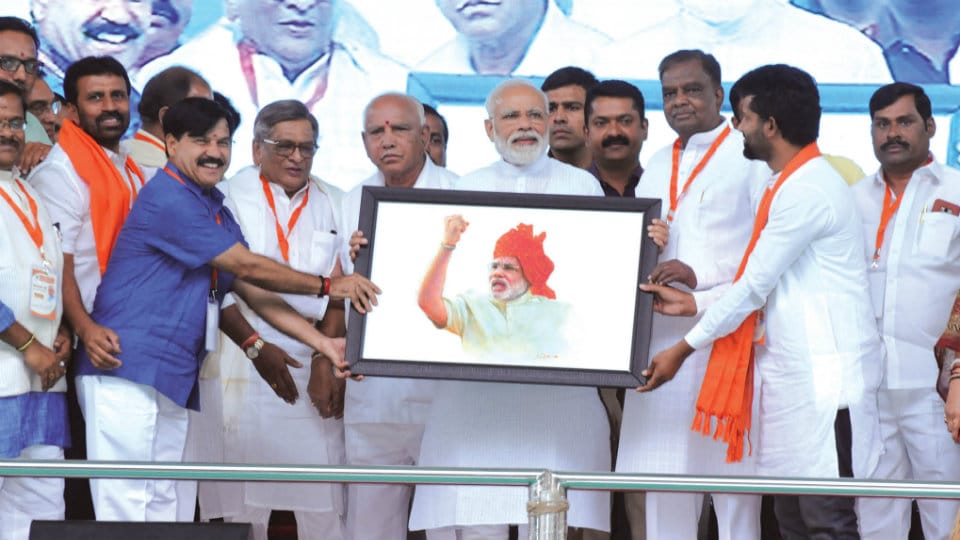 ‘While Congress gave the nation 2G Scam, we gave Smartphones and internet data at economical prices’

Mysuru: Ripping apart the coalition partners Congress and JD(S) in Karnataka and highlighting their inherent differences, Prime Minister Narendra Modi said that Congress President Rahul Gandhi was not contesting from Karnataka as he feared the JD(S) would extract revenge on him over the Congress withdrawing support to the Deve Gowda Government at the Centre in the past.

Modi did not mention Rahul Gandhi by name but referred to him as the ‘Naamdaar’ who decided to contest from the ‘safe seat’ that was Wayanad. “When Deve Gowda ji was the Prime Minister, he was back-stabbed by Sonia Gandhi. Congress doesn’t trust JD(S) and, hence, ‘Naamdaar’ hasn’t dared to fight elections from Karnataka,” Modi claimed at ‘Vijaya Sankalpa Yatra’ organised last evening at Maharaja’s College Grounds here.

“The Congress has justified ‘Naamdaar’ contesting from Kerala as the result of his desire to contest from South India. So, ‘Naamdaar’ should have contested from Karnataka where the party has a Government. The country is discussing whose flags were being waved there,” he said.

“When Amethi, a safe Lok Sabha seat of the Congress President Rahul Gandhi, turned dangerous, he runs to Wayanad in Kerala. A leader wanting to become the next PM should not run in such a haste leaving away the party in Uttar Pradesh,” he ridiculed.

Continuing his attack on the grand old party, he lashed out at the Mahagathbandhan for “lacking a vision” for the country and said those parties cannot go beyond “Modi Hatao” (remove Modi) in their speeches. The functioning of the Congress-JD(S) Government in Karnataka betrays this lack of vision, he said, alleging that Chief Minister H.D. Kumaraswamy had become a “punching bag” for the Congress.

He reiterated his ‘sab ka saath, sab ka vikas’ mantra and compared the manifestos of his own party and that of Congress. “The only agenda of the Congress is to defeat Modi, ‘Modi Hatao.’ Thus they cannot think of development of either the nation or its people,” he said.

Referring to the proposed surgical strike of the Congress on poverty, Modi said, “The Congress announced projects, schemes and programmes in the name of the poor and cheated them over several decades. Now, the poor people have started saying, ‘Congress Hatao, garibi apne aap hatjayega’ (Remove Congress, poverty will be removed automatically).”

“To add insult to injury, the Congress is projecting the middle class tax-payers as anti-nationals. When the Congress was in power, the maximum tax exemption was for Rs.2 lakh. We increased it to Rs.5 lakh. If voted to power, the tax-payers will get more respect,” he said.

“The JD(S)-Congress Coalition Government in Karnataka has cheated the farmers by just announcing the loan waiver. No farmer has benefited so far. The farmers are still getting notices from Banks, demanding repayment. The State Government is not allowing the farmers to get benefits even under the Centre’s Kisan Samman Nidhi. The Karnataka Government has not given data about eligible farmers, while crores of farmers in other States are getting the benefit,” Modi said.

While the Congress gave the nation 2G Spectrum scam, we gave Smartphones and internet data at economical prices, he said. Recalling his last visit to Mysuru, in February 2018, when he launched a slew of works, including the laying of foundation stone for the 10-lane Mysuru-Bengaluru Highway, Modi said that the transport scenario will change drastically once the road works are completed.

“Mysuru will also benefit under the UDAN scheme to strengthen air connectivity. The nation’s first Post Office Passport Kendra was launched in Mysuru,” he said.

Modi said that top clean cities were programmed under the NDA Government and Mysuru emerged on the top among the Indian cities, besides the Old Mysuru region given impetus to more Central funds. Modi said the BJP will be blessed by Lord Chamundeshwari, while the Coalition Government of Congress and JD(S), indulged in squabbles in Karnataka, may face defeat.

Actor-turned-politician Sumalatha Ambarish, who is fighting a high-voltage electoral battle at Mandya as an Independent candidate, received a shot in the arm yesterday with the Prime Minister making a special mention of the actor and her late husband Ambarish. She is pitted against Nikhil Kumaraswamy, son of Chief Minister H.D. Kumaraswamy, contesting as coalition candidate.

Before summing up his 35-minute long address, Modi said, “The works undertaken by Ambarish is in the minds of people. Both Sumalatha and her husband Ambarish have contributed to the language and culture of the State. We should strengthen Sumalatha.”

Modi’s remarks evoked loud applause from the crowd. Asking people to vote for Sumalatha, Modi said the people have kept Ambarish in their hearts because of his work. Along with Sumalatha, Ambarish’s contribution to Kannada and the culture of the land is praiseworthy, he said.

In Mandya, Sumalatha, reacting to Modi’s remarks, said that she felt happy that her name was mentioned by the Prime Minister. “It is an honour for Ambarish that his work has been recognised by none other than the Prime Minister. I am happy about it,” she said.

2 COMMENTS ON THIS POST To “Modi tears into coalition; mocks at Rahul’s Kerala contest”